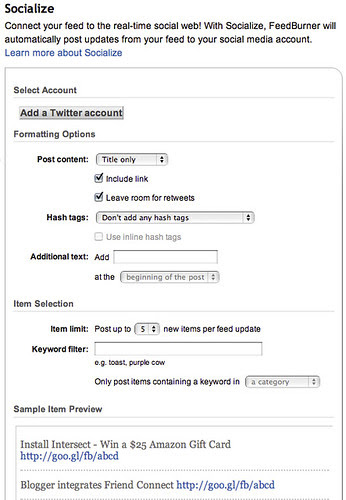 Google's Feedburner recently rolled out a new feature allowing you to automatically push new posts from your feeds to Twitter accounts. Not only does this shows Google's intent to further integrate with the services you use but that they want to do it to the best of their ability.

The interesting part of this is it uses http://goo.gl as the shortlink. Goo.gl is going to be one of the longest lasting shortlink providers ever.

Automatically shortening the title to leave space for retweet text. This could be improved by scaling the extra space based on the length of the Twitter username. For example "RT @abraham: " takes 13 spaces including the space but Feedburner left 27 in my test post. I suspect the number varies depending on word lengths so as to not include partial words.

The most interesting feature to me in that Feedburner uses the post categories to turn title words into #hashtags instead of just adding them onto the end.

A month of Flutter: the real hero animation

December 30, 2018
Originally published on bendyworks.com . For the last post before the month's wrap up tomorrow, I wanted to do something more fun: use a  hero animation between the home page list and the individual post page. When I first implemented the  Hero  animation it never worked going back from a  PostPage  to the  HomePage . The reason was that  HomePage  would get rerendered and that would  generate new fake posts . So I moved the fake data generation up a level to  MyApp  and pass it into  HomePage . This is more realistic as going to the  HomePage  shouldn't request the  Post s every time. HomePage ( title: 'Birb' , posts: _loadPosts ( context ), ) The  PostPage  implementation is a simple  StatelessWidget  that takes  Post  and renders a  PostItem . This will become more complex as things like comments and likes are implemented but works for now. class PostPage extends StatelessWidget { const PostPage ({ Key key , @required this
Post a Comment
Read more