May 10, 2010
@Twitter recently had an interesting bug dealing with their mobile commands. Tweeting "accept abraham" would result in me following the tweeter. Awesomely though the bug was not limited to just me, any screen_name would work. Shortly after the bug widely known Twitter disabled viewing of relationships leaving everybody following zero people for a couple of hours. Twitter has since locked down the command and appears to be cleaning up the resulting mess.


Follow bug discovered, remedied. Read our status blog for details. http://bit.ly/dhQ3fFless than a minute ago via web

@TwitterAPI was following me for a little while. 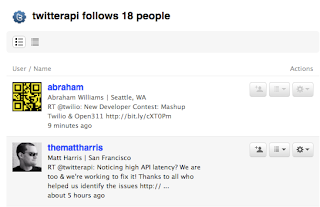