How to run multiple Firefox instances on a Mac

January 06, 2011
With Firefox 4 just around the corner it is time to get those extensions upgraded, flash dumped and sites tested. Quite a few developers will to be testing in stable 3.6 as well as the new betas. In fact at this very moment I'm working on porting a Google Chrome extension to Firefox using the new Add-on SDK. Luckily Firefox makes it easy to run multiple version of concurrently. Keep reading to figure learn how.

2) You now have two version of Firefox installed but if you open them at the same time all kinds of conflicts with sessions and dirty exits will cause issues. We can fix that by creating multiple user profiles so that each Fx instance has it's own safe data silo. To create a new profile open a terminal window and enter the following command.


You should now see a Firefox popup prompting you to choose a user profile. 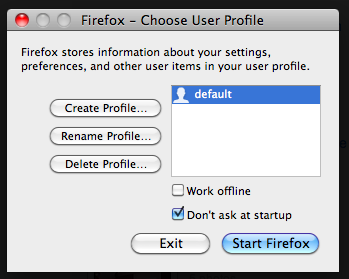 3) At the prompt we are going to do a couple of things. First rename the default profile to default3.6. Then create a new profile named default4.0b8 (just leave the folder setting to default). Finally uncheck "Don't ask at startup". The finished settings should look like this: 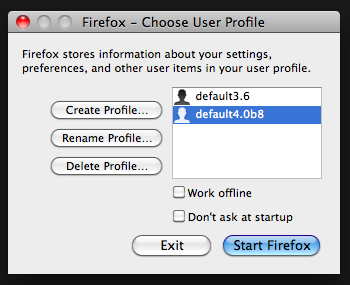 4) Now you can highlight default4.0b8 and hit "Start Firefox", followed by opening Firefox3.6.app, highlighting default3.6 and hitting "Start Firefox" again. You are now running two version of Firefox at the same time. 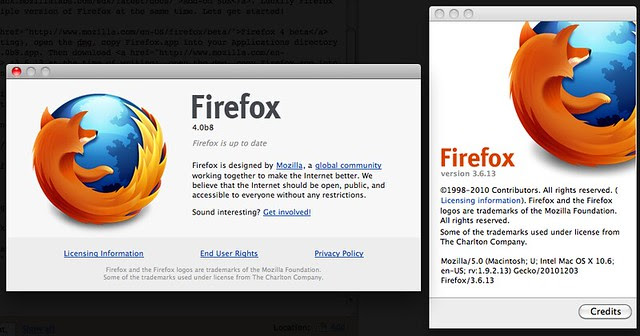 What are you using as you default browser?