The good, the bad, and the Moto X 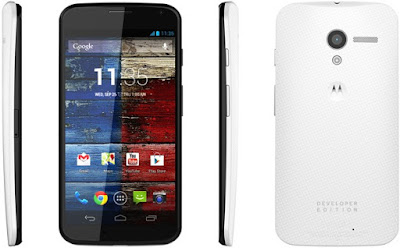 At first it felt cheap and plasticy compared to my Nexus 4. Now it feels right and the Nexus 4 feels heavy and the glass feels like it could shatter at any moment.

And before you ask, no I did not get to customize the colors of my Moto X, I purchased the developer edition which is only available in black and white. Which is fine, I'd rather have that than a locked colorful version.

The screen is fantastic. Watching a video on it makes the phone melt away and leave only the media.

The idea behind touchless controls is pretty cool, but in practical application, touchless controls are useless to me. This is 100% because of my security paranoia though. I have PIN on every mobile device I own and I trend towards the security side of the spectrum instead of the convenience end. Having to manually enter a PIN for every voice request completely removes the less from "touchless". My two hours of using the Moto X before configuring a PIN hinted at it's potential though and for those not as concerned with security, this will be fantastic for everyday use.

One small part of this feature seems so unimportant before experiencing it, but after only a short period, I don't ever want a phone without it. Simply taking the phone out of your pocket (or flipping it over on the table) automatically displays the current time. I know what you're thinking...that it's really not that difficult to hit the power button to turn the screen on and off. And you're right, it's not that hard. But this just feels so much better!

The main feature of showing notifications without having to turn the phone on useful too. It even works with a security PIN and will lead to fewer unlocks as you can check out the snippet and decide if any actions need to be taken.

With the device manager you can remotely lock, locate, or wipe your device. It's kind of odd that Motorola is offering this as Android now has it built it. I opted not to use it as I've already got the built in device manager, and Google Apps device manager setup.

The camera interface minimalist and stays out of your way so you can get the job done.

I didn't think much of the quick capture camera at first. It seemed like a gimmick for the sake of being flashy, and in some respects it is. But it's also an elegant solution needed because of how the active display changes the interaction model. In existing phones you always have to hit the power button to turn the screen on. At that point it's a simple swipe on the lockscreen to bring up the camera and start snapping away. But with the active display, you get of the habit of seeing the lock screen unless you have the intent to unlocking your phone. The double wrist twist is simple, fast, and easy.

Touch anywhere to take a photo is nice. I do miss the standard Android interaction of tapping to focus and I've already had one macro shot I was taking that was focusing on the wrong distance. A small price to pay I guess.

Sadly photospheres are not currently supported. Hopefully support will be added in a future software update.